REACH FOR THE STARS

Avalon was asked to produce an awards ⁄ recognition banquet for top sales producers. The event was at the Fairmont Scottsdale Resort. We named the theme “Reach For The Stars.” This engendered both the spirit of the event and was meant to inspire the attendees.

A cocktail reception was staged in the foyer, just outside of the ballroom. As dinner approached, guests entered the event space by walking down a VIP red carpet lined with red velvet rope and gold stanchions while passing under a giant , dramatically lit marquee arch entrance with custom signage. A Hollywood Walk of Fame, customized with award winner’s names on gold stars, was placed adjacent to the red carpet. 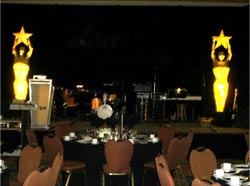 The ballroom was a vision of elegance and glamour with black and gold decor accents, lush flowers, and giant Golden Award Statues framing the stage.
In addition to the giant golden statues, (each statue holding a golden star), the stage featured an acrylic podium as a contemporary accent. Golden uplights were placed around the room. 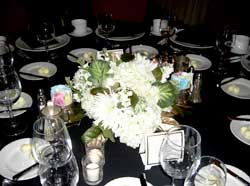 An eight piece show band played upbeat entrance music. The perimeter of the event space was set with clusters of large varying height feather palms. Each palm was constructed using oversized real ostrich feather. The colors were black and white with a hint of red.

After dinner, the awards were presented in the grand style of Oscar with the band providing “walk-up” music for each winner. At the conclusion of the awards banquet, an airwall adjacent to the next ballroom was opened to reveal our after party night club: Legends Lounge. 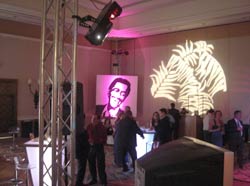 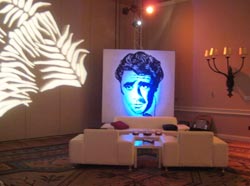 The exciting music of a DJ filled the air and complemented the special effects lighting set on truss around the stage. Sleek LED highboy tables were placed in the event space. Each highboy was topped with votive candles and surrounded with acrylic and chrome stools. Lounge furniture was arranged for comfort, conversation and relaxation. Coffee and end tables were adorned with glass cubes and floating candles.

The perimeter of the event space was set with 8’x 8’ hand painted “famous legends of Hollywood” art panels. Each panel was dramatically up lit and set at different heights for visual effect. Theatrical lights provided a multi-colored wash, including palm frond gobos, on all wall structures and dance floor. Uplit plant groupings of palms and ferns were placed around the room to complete the look. 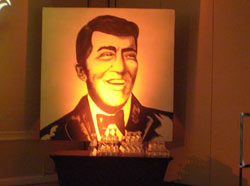 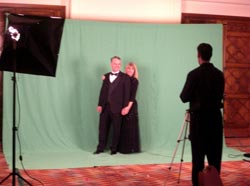 A “green screen” photo station provided costumes and choice of backdrops for guests to capture the evening and take home instant photographs as mementos. Guests packed the dance floor and signed up for Karaoke where they were truly the Stars of the evening!